Clear skies and a slightly cool evening. Perfect hashing weather for the delights of Lismore. The start was slightly delayed as Hare Kizzme gave instructions for the walkers ("no arrows - but Slurrr knows the trail") and the runners ("trail with a 'pinch' at the end"). Upcycler asked what a 'pinch' was. Apparently a 'pinch' is a steep incline that you really do not want to attempt, but that is where the trail goes. After another short delay awaiting Bituman, whose hash joke was deeply anticipated, the hash was off, with Kizzme leading the runners and Slurrr the walkers.

The walkers soon found themselves stepping out to a brisk pace as they ventured deeper into the deep dark of the night. Whilst most hashers do not take much notice of the Hare's comments, certain hashers, when confronted with an incline, realised they had arrived at the 'pinch'. As it was an incline they had no intention of ascending, they skirted around the edge of the hill, back towards town. Bravely, the rest of the walkers ascended. As there were no runners gasping for air on the slope, it was assumed the runners had already blazed a trail up and over this modest hill.

Back down at street level, the brave walkers and non-ascending walkers were re-united, to walk the quiet city streets back On Home.

Gathering in the back room of Tatts, the hash were quickly called to order by Religious Adviser Upcycler, who asked Bituman to speak about the run. He noted that there were not many runners (only three apparently), but it was a sensational run that included a few 'virgin' streets and, also, as the Hare is an artist, the run had a fascinating artistic flavour. Through a series of loops, the trail wound past the artistic wonders of Lismore including an artwork by Hare Kizzme and the strangely named 'bum-tree'.

Slurrrr spoke about the walk and remarked that the trail had split into two groups; walkers and wimpy walkers. The wimpy walkers had baulked at the 'pinch' and, along with Alternative Root and Draggin' The Chain, had deviated from the hill and chosen an alternative route. Slurrrrr noted that the walkers all kept well together and appeared to relish the hill (which goes to show how deceptive darkness can be). Auntie Lush had an ongoing tussle with Storm throughout the walk. Storm won.

As plates of food were banged down, Down Downs were handed to:

Another great hashing night at the Tatts Hotel - Many Thanks to Hare Kissme! 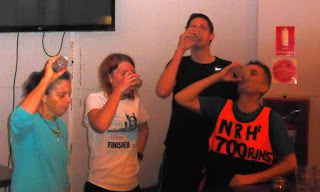