A beautifully warm and sunny afternoon turned into a very chilly and windy evening, much to the surprise of the (now) many under-dressed hashers. Hare Impulse had obviously anticipated the change as he led off the walkers wearing a large storm jacket that would not have looked out of place on the North-West face of Everest. Clutching a map, an equally warmly attired Hash Brown led off the runners. He was wearing a multi-coloured top that celebrated a previous Rugby Union World Cup. Apparently, it is some kind of sport.

Zig-zagging in loops, the hash descended down from the ridge line as a glorious sunset filled the western sky. Quite a few of the walkers were filled with an uneasy trepidation, based upon the 'what goes down, must come up' theory. Denise mentioned the many steep hills around where she lives and hoped the hash were not going to be scaling steep streets to get Home. Fortunately, it was not to be. Hare Impulse held many Hash Halts  to keep the walkers together (for which No More Gaps later thanked him in the Circle) and, with Slurrr and Bingo setting a cracking pace from the front, cleverly followed along contours so that there were not too many steep climbs. However, ascending through one particular reserve proved rather taxing for Miss Took. She prostrated herself on the ground and appeared to be praying to Mecca, although she was pointing more in the direction of Hong Kong.

The runners appeared out of the dark night at one point as, following a stunning full moon, the hash wound a trail On Home. Back on the ridge, some walkers extended the walk, again meeting the runners as they turned for Home on a night of true 'moonshadows'.

On Home, hashers variously wrapped themselves in blankets or warm jackets against a biting wind. Alternative Root was sporting more layers than a Russian Matryoshka doll and still looked cold. Religious Advisor Upcycler quickly called a Circle and opened by asking Denise to talk about the walk. After an initial hesitation, she was almost unstoppable. She spoke about her night of going up and down a lot, including experiencing a bit of Cynthia Wilson. A long grassy slope with a prostrate Miss Took proved enough excitement for the night, so she joined the shortcutting group after that. Hash Brown said the run had six runners and a perfect gender balance. He found it enterprising and, as it was short, no one complained.

There then followed an excellent hash joke from Slurrrr, which some, who were having a 'blonde moment' of their own, did not quite understand. Auntie Lush, who appeared to be wearing an Argentina Rugby shirt, then advised on the hash grub arrangements. She announced that hash veggies were being catering for indoors, presumably in the shadows of a closed door room. All the rest were left to feast themselves from tureens of excellent brown rice and a chicken thing, with many second fillings being devoured.

Many Thanks to Auntie Lush and Impulse for hosting the hash from not-so-hilly Invercauld Road. 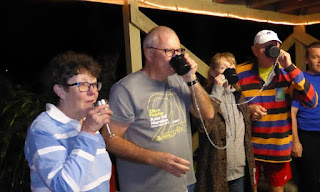