Another great turnout. Whilst waiting for the call of "On On", Hootu, recently returned from a sensational Great Queensland Bike Ride, was offering a feel of his allegedly iron-like thigh muscles, to members of the opposite sex. It is not known if Polarised, who had similarly returned, was making a similar offer. Calling the hashers to order, Hare Spin Cycle advised the hash that two trails were marked. The runners were on white chalk and the walkers on pink.  The Hare had marked specially designed arrows, to avoid any confusion with other arrows. However, in the rapidly fading light it was proving difficult to distinguish one colour from another, so a few difficulties were anticipated....

The runners quickly loped off, followed by the walkers. Auntie Lush had been furnished with a map of the trail but Storm had his own ideas, so the map was passed to Hootu. The first real obstacle was a hillside of squawking plovers that was like passing through an un-nerving scene from Hitchcock's 'The Birds'. Crossing a road, the walkers were led down towards Butterfly Park, although the route was not as marked by the Hare. It did not take long to be off-trail. In the park, the walkers paused at a creek crossing to look for platypus in the half-inch deep water. Unsurprisingly, none were spotted. Still, some hash marks were found, with a check of indeterminate colour near a footbridge. Miss Took appeared confused between the check, a manhole cover and a series of Council marking that denoted cracks that required repair. Fortunately, everyone else understood what was required and the walkers set off following arrows. However, once out of the park, confusion set in and the walkers split into two groups, both happily following what they thought was the trail.

Despite the confusion, the various hash groups enjoyably wound around various streets and made their way Home. One group also looped around the hockey field as Lost With Space is genetically incapable of passing by such fields of dreams (even though it appeared every ball game apart from hockey was being played). Whilst skirting the hockey field, Draggin' The Chain and No More Gaps discussed the many varied ways they had inadvertently introduced various items of a botanical nature into their undies, after answering the 'call of nature' in a paddock. A vineyard was particularly memorable for No More Gaps. It is only to be hoped that the vines did not have any thorns.

Back On Home, the walkers arrived in two groups, as did the runners. Religious Advisor Upcycler called a Circle and Hash Brown spoke about the run. He declared the 'on-backs' to be fantastic and to have cleverly caught a few of the runners. The run had appeared to be perpetually uphill, with a figure of eight, some cross-country and had been excellent. Some runners had even found time to talk.

Lost With Space spoke about the walk, which was noted as having two distinct groups. Space Cowboy and Saddle Sore interrupted and tried to talk about a peach and white coloured cloud, spotted on the trail, but were quickly howled down. In closing, Lost With Space said the walk had been lovely and really enjoyable.

Both Spin Cycle and Impulse sportingly downed their 'Down Down' in their new shoes, a long-standing tradition within Hash for anyone who wears new shoes - and one worth remembering!

No More Gaps gave a hilarious rendition in anticipation of the forthcoming Rugby World Cup, which was closely followed by excellent grub, cooked by the Hares on their camping trailer kitchen.

Many Thanks to Spin Cycle and Steve for hosting the On Home from the novel location of their industrial unit and a really enjoyable hash in (almost) flat Goonellabah. 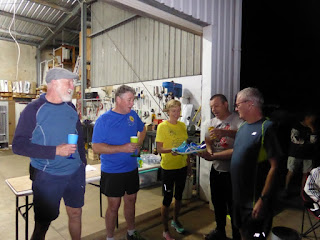