Next Run - (no. 1571)
When - Monday 31st August 2015 6 p.m.
Where -  The Tatts Hotel, 108 Keen St Lismore
Hare - Kissme (Kate)
Last Run - (No. 1570)
When - Monday 24th August 2015
Where - Goonellabah Tavern
Live Hare - Impulse (Garry)
Wasn't it great to walk and run about in the warm evening air?  It was like we had woken from hibernation, warm, refreshed and eager to go.  The approaching new season literally put a spring in our step.
What also kept us hopping was the gathering storm, complete with lightning and thunder claps.  Fortunately, we all outraced the rain.  It was when we were all safely inside the Goonellabah Tavern that the clouds opened up and down it pelted.  Phew!
Earlier in the week it looked likely that we would all be trailing around hareless but hirsute Impulse stepped in at the last minute and prepared the hash trail.  Thankyou Impulse for the extra effort and strength to withstand the inevitable backlash.  Our live hare was careful to stay well ahead of the pack.  Tradition has it, if the live hare is caught, their pants are pulled down.  This would have left Impulse appropriately in his birthday suit.  Yes, it was his birthday last week.  It's a shame he wasn't caught - we could have amused ourselves with that story for years to come!
Welcome back Plugger and Goanna.  After travelling thousands of kilometres across Australia over a period of several weeks, did they go home and have a hot shower and sleep in their comfy bed?  No.  They got their priorities right and came straight to hash.  They are hashers through and through.
Aunty Lush led off the large group of walkers with a little help from Kirklands.  Hootu, with his bus driver know-how, internally mapped out a route which brought everyone back to hash home in near perfect time.
All harriers had to cross the busy main road en masse.  It was dark, it was peak traffic time, there was no pedestrian crossing and there were headlights in our eyes.  One lone car approaching prompted a few false starts.  After all, it was unlikely that one car could run us all over.  It was a case of "Follow me, I'm right behind you."
This run had it all - hills, on-backs, long distances between arrows, arrows that couldn't be found.  Runners had to spread out, adding extra kilometres to the trail, while calling out across the nightscape.  It became increasingly frustrating.  At the bottom of a hill, facing an on-back, I needed reassurance that we were enjoying ourselves.  I was assured we were.  Good.  Upon winding our way up to the highway once more, we made a fast dash to hash house home.  That was a good tough run.
It was a big, noisy group that enjoyed the nosh at Goonellabah Tavern.  Kissme and Upcycler were the only two bothering to participate in the photo. 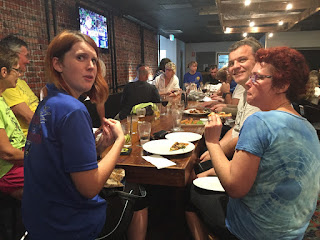