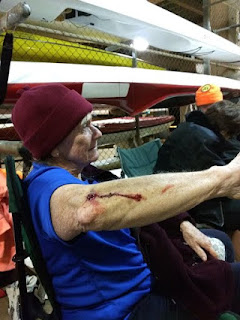 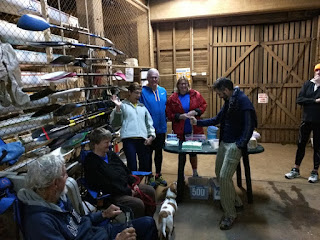 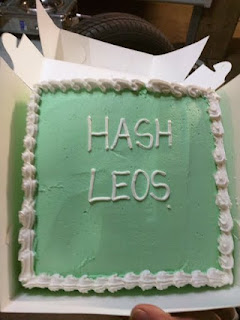 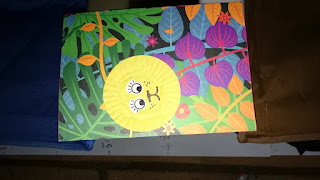 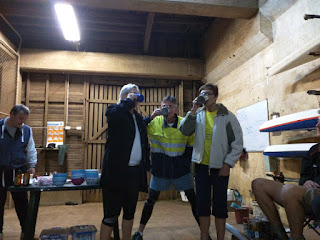 Under the bright lights of Venus and our moon, on a beautifully warm and dry winter evening, walkers and runners gathered.  The setting was the footpath outside the Richmond Hotel, Woodlark Street, yet the chatter of friendly voices could be heard as far as Magellan Street.

There was much to talk about (much of it nonsense) but the footpath topic of the evening was the prowess of the runners and walkers who participated in the Gold Coast events over the weekend.  Congratulations to Hash Brown, Spin Cycle, Polarised, Hootu, Bituman, Aunty Lush and Impulse.  Praise to the runners who were strong enough to run another 7.8km of hash trail.  Slackers Hash Brown and Spin Cycle weren't.  Proudly wearing finisher shirts, and with chests inflated, the talk of PB's, split times and future ambitions continued well into the evening.

Welcome to a couple of newcomers, walker Bronwyn and runner Liz.  Liz joined us all the way from the UK via Townsville.  Polarised suggested Liz has developed a funny Clunes accent.  Possibly her other hobby of wine tasting has contributed somewhat to this.

The walkers set a cracking pace past the nicely lit shops of Lismore with Slurrr leading the way.  Discussion was on the changing shops over the years especially the determination of bargain variety stores to pop up where others had closed.  Walkers continued on to South and North Lismore.  After a while, there was a trail of twinkling hashers spread over two blocks.  Everyone seemed happy because the flat terrain freed up the legs thereby enabling extra effort to be put into exercising the jaws. As we turned for hash home, someone among us danced down the street singing "I'm A Little Teapot" complete with actions (might that have been you Bloodsucker?).  We would all love to know what prompted that regression into early childhood.

Hare, Bituman, on a quest to set the worst hash trail ever, placed the markers for the runners along poorly lit streets using anaemic and/or pink arrows hidden in the darkest places.  Runners were perplexed (and lucky) to spot one arrow in the middle of the road, apparently placed there from a moving car earlier in the day.  As a result, it was rather faint after being run over by cars and trucks all day.  For an added challenge, he had them cross in front of a truck which wasn't the daredevil thrill you might expect it to be.  But wait... There's more... There were lots of hills! (Note to hares: Hills will always draw complaints).  There was so much swearing, there was concern that the new runner's ears might bleed.

Safe and sound at last, back at the Richmond Hotel, where we gathered because Bituman can't cook, the complaints came quickly and freely.  The banter was so high-spirited, it's only fair that Bituman be given a right of reply.  From his point of view, the run was sensational, the best in fact since 1942.  He was disgusted to be stabbed, not in the back, but in the face!  Kudos for setting a new trail which, let's face it, can be a real challenge.

Thankyou to two 'ladies' who added a touch of class to the evening - Alternative Route in her attire of red felt hat and black pearls and Lost With Space who sat smugly sipping a pretty pink cocktail.

As it was a pub run, no actual down-downs were given.  Virtual over achiever down-down to the Gold Coast participants and virtual shitty down-down to hare Bituman.  Despite all the flack, our jokemeister was still able to give us a kerbside joke as we were leaving.

On on
Spin Cycle

Note: NRHHH will reimburse hares up to $80 only for the meal unless it's a special occasion organised in advance.
.

Posted by Gary Manning at 8:51 am No comments: