A mild and star-filled night (astral stars - not celebrity ones). The weather was obviously inspirational as everyone was early and, after a short briefing by Hare Miss Took, the runners led by Procol raced off in one direction and the walkers strode off in the other. Clutching a map, thoughtfully provided by Miss Took, Goanna led the gaggle of walkers down the road through the deep dark night. Being deep and dark, the night kept the walkers together as they meandered along pathways and down snickets, being passed a couple of times by the runners. Slurrrrr and Di led from the front as a rapid pace was set up, which became even more rapid when Teven Road was reached. Scrambled Eggs, being a wise old bird, took a shortcut On Home at this point whilst the walkers, briefly re-united with the runners, then weaved through a reserve and night-black streets. Passing Coles, Slurrrrrrr was able to obtain some much needed retail therapy, then On Home.

The large pack filled the Hares deck and (sort of) settled down when Upcycler called a Circle.

Hootu was asked to speak about the walk and, as usual, gave a virtual step-by-step description that took almost as long as the walk itself. He said there were two highlights on the walk and noted that, as it was Miss Took's first attempt at setting a hash trail, he had set out wondering "how would she do?" He was pleased to report that she had done very well. He found the walk very intuitive and, being Miss Took's first trail, a shared experience. His comment that the arrows appeared slightly faded was (politely) howled down. Hootu had also paused for a pee along the trail and was happy to note that the new hash tee shirts did not give him 'nipple rash'. He certainly sounded to have had a jolly time, although which were his 'two highlights' remained uncertain.

Twiggy spoke about the run. He said it was apparently flat, with only one hill, but his lack of fitness made it all seem uphill. He found running at night quite a new experience, particularly as he had not brought a torch, which at times made it a most interesting experience. However, despite being unfit and stumbling around in the dark unable to see any arrows, he had obviously enjoyed the run.

Miss Took's Mum then delighted the hash with her story of 'An Italian in Malta', delivered in an authentic accent and spiked with innuendo. A wonderfully ribald 'story'. The table was then loaded with a glorious meal of tacos, that saw the return to the table for many refills by many hashers.

Many Thanks to 'Virgin Trail' Hare Miss Took for a great trail, hosting the hash and tremendous tacos on an excellent hash night. 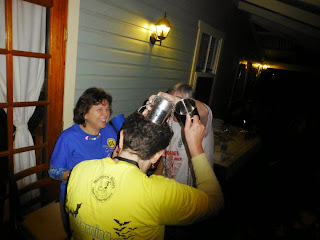 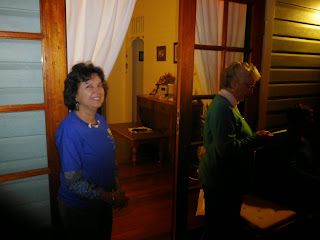 Plugger
Posted by Gary Manning at 9:23 am