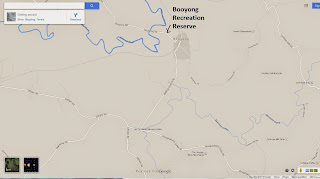 Directions - attached. The best way to come from either Lismore or Alstonville is along the Eltham Road.
Bring a chair and if the weather is wet - don't hesitate to give us a ring - Plugger on 0409 768 015

Much to Hare Runnymead's relief, there was a great turnout for her hash - especially as she had actually set the trail herself. Rain was forecast but a beautiful evening filled the sky, so it seems, fortunately, that the weather bureau got it wrong again. After the Hare's detailed instructions (including advice that there were no on-backs) utilising Feel Free's hand-held hand microphone hand (you had to be there), it was time for ON ON. A loping Hash Brown led off the runners as Runnymead  led off the walkers and, joining the many other evening walkers, runners, cyclists and painfully slow amblers, the hash were soon making their way out to the end of the breakwater. At around the halfway point the walkers met with oncoming runners Impulse and Spin Cycle, as happy running as the rest were walking. After pausing at the end of the breakwater for a photo shot, where Lost With Space appeared to be saluting the mainland and Runnymead carried out a series of neck exercises, it was back down the breakwater and across the sands.

A brisk pace was set by Slurrrr and Headlamps, closely followed by a surprisingly orderly procession of walking hashers. The Hare's carefully constructed beach arrow had been destroyed, but chalk arrows were soon found and a brisk pace was resumed, skirting around the edge of an inlet. At a picnic table, a trio of hashers were enjoying the evening. Dame Edna, Auntie Lush and Kizzme were all happily enjoying 'sundowners' at the water's edge. In search of 'sundowners' the hash strode off to arrive back at the pub where welcome drinks were soon in hand and a long table proved perfect for the hash to congregate and dine around.

A most enjoyable hash on a stunning evening. A well marked trail, that seemed to have forgotten about checks, as well as on-backs - but thoroughly enjoyable all the same. Many thanks to Hare Runnymead for organising the hash and setting an interesting trail. 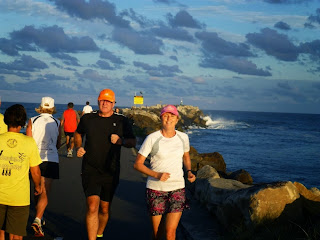 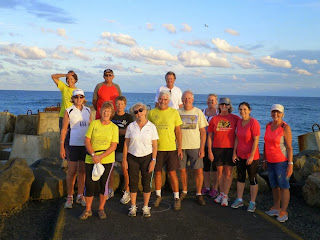 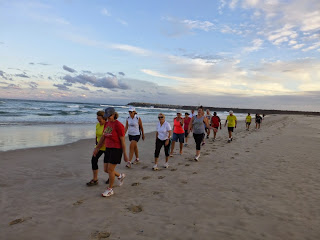