Next Run (no 1531)
When - Monday 24th November at 6pm
Where -Wardell Sporting Recreation Club, the address says its 75 Pine Street, but in reality its 72 (ish) Bath Street which is the extension of Wardell Road. If you are coming down Wardell road from Alstonville its on the left about 500mtrs from the next intersection.
They are going to do a sausage sizzle @ $5 per head which will give you 2 snags bread onion and some sauce, drinks are at bar prices.
Hares - Saddle Sore and No More Gaps

An excellent turnout to the Canoe Club - including Claytons. A total misunderstanding between brother and sister resulted in the run being set by Hootu at the Canoe Club instead of in Clunes. However Hootu made the most of the flat terrain in Lismore, by taking in most of South Lismore and the CBD, including one hill! The start of the run/walk was totally confusing as we all managed to run/walk a complete circle before ending back at the Kirkland Riviera car park next to the Canoe Club. At which stage, the Hootu joined us. The runners kept running past in both directions - obviously as confused at the walkers. It was then down the rock embankment to the path by Hensley car park, which tested some of the walkers rock scrambling abilities. Auntie Lush was temporarily relieved of storming Storm, by the gallant Space Cowboy, to allow her a more gentle descent. The decision was then made by the walkers to follow the runners over the bridge, at which stage Hootu left the walkers to their own devices. A power group led by Slurrr charged up Bridge Street, whilst the back walkers, including yours truly, decided the trail had to go into South Lismore and called everyone back.

The runners were now no longer to be seen, as the walkers did the circuit back over Ballina Street bridge and back to the Canoe Club. Lost with Space however created a stir, as she groped the inflatable karate man in Union Street. Space Cowboy who is possibly used to Lost with Space's antics was left to pickup the pieces.

The walkers got back just before the runners,  Procol and Polarised raced in. Who said Hash wasn't a race? (Procol won..).

Impulse described the run as 'a very interesting 8km run', although he was non too impressed with the on-back up John Street. Runnymede attempted to talk about the walk but appeared lost for words. However Space Cowboy did comment that walkers 'didn't do on-backs' as it spoilt the chatting time!

Claytons, Spin Cycle and Lost with Space achieved the impossible by not spilling a drop when drinking from the board! 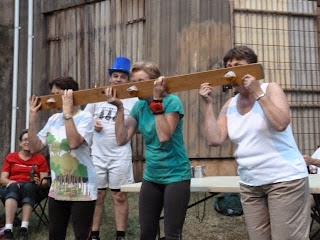 Sausages and salad were then devoured by all. Many thanks for Hootu and Polarised for a good, but confusing trail and great Hash Nosh.

Posted by Gary Manning at 8:24 pm No comments: