Hares - Dame Edna and Out of Africa

With a couple of regular runners away, a very small group of runners set off, with the walkers close behind. Perfectly drawn arrows marked the trail. Crossing a small footbridge, the walkers ambled (it was that sort of evening) towards SCU, stopping for a Hash Halt near the Koala Sanctuary. The runners had long since disappeared and no koalas were around either so, with Senior Citizen/Pensioner/Birthday Boy Hash Brown leading, the hash walkers continued up the slight rise to the Uni. Once amidst the Uni buildings, Hash Brown decided to deviate from the beautifully marked trail and took the walkers on a scenic route that skirted across to St Vincent's Hospital, where he recently had the dubious pleasure of being a guest. After much talk of other hashers medical visits to the hospital, the medical sightseeing detour was over and the walkers headed towards home.

Just after passing some tennis courts the walkers split. Most took the direct trail home (Draggin' The Chain was particularly keen) whilst a keener bunch, being Hash Brown, Retread, Slurrrr and Plugger, took a slightly longer trail home, returning back via the cemetery. Passing through the pitch-black of the cemetery, Slurrrrr declared she would have a word with her grand parents, who are apparently long term residents. They must have been busy, as no murmurings of conversation could be heard in this rather spooky setting.

Back at Hare Tea Bag's residence, a large hash gathered in a less than large front terrace. It was cosy. Proceedings were delayed slightly as birthday cakes were collected, so Bituman kept the hash entertained with a stream of jokes. As per the established tradition, some jokes were appallingly dreadful.

Impulse was asked to enlighten the hash on the run but, somewhat impulsively, Bituman jumped in and spoke about the great run hash run and perfectly shaped arrows, which Hare Tea Bag had lovingly marked along the trail (although, it was noted, the quality of the arrows tailed off towards the end). Impulse thought the arrows were so numerous and carefully drawn, Tea Bag should be called Apache.

Tea Bag  - Hare for a well set hash - everyone loved the arrows
Caroline - Virgin Hasher who we hope comes again
Upcycler  - for a stunning success at Toastmasters  - well done!
Yarnbomber - for the hash cardinal sin of wearing New Shoes, with the requisite penance being applied. Thanks for being a great sport!
Impulse - for competing in the Byron Lighthouse run, then still coming along to hash

There were lots of Birthday Down Downs with:

Hare Tea Bag served up an excellent meal that was greatly appreciated, followed by birthday cakes for Hash Brown and Toe Cutter. Hash Brown demonstrated his new Senior Citizen status by showing a complete inability to blow out three candles.

Many Thanks to Hare Tea Bag for a great hash trail, great hash grub and for hosting the hash - and for those spectacularly marked arrows! 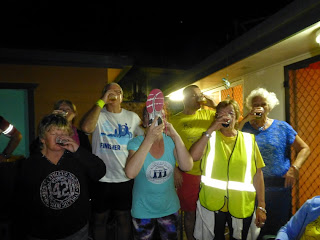 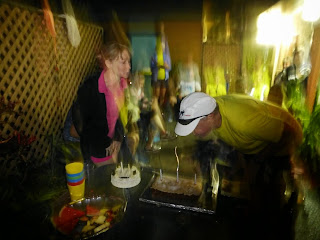