A beautifully sunny afternoon. Perfect Labour Day weather to be not labouring away somewhere but limbering up for a delightfully flat hash run. Shading eyes from the glaring sun and glaring pink of Toecutter's new outfit, the hash was briefed on the forthcoming delights of the trail. Rome was famously built on seven hills and and, apparently but somewhat less famously, so was East Ballina. The hash was going to run them all.

Hare Dame Edna warned the hash about the seven hills and lots of steps. Taking the advice given, some walkers, led off by  Draggin' The Chain, who appears to suffer from some form of acute vertigo when hills are mentioned, opted for a flatter loop around Shaw Bay. The rest of the hash was led off by Hash Brown and immediately began racing up the first few steps of a long flight of steps and after about twenty more steps, the sound of much puffing and panting filled the air.  On top of the steps the small group of runners loped off as the walkers meandered the leafy streets, climbing the rest of East Ballina's hills and, high on the crest of one hill, actually seeing a whale as it breached out in the ocean.

Retread was in great hash trail form, correctly leading the walkers 'On On' at each check and even spotting arrows (which were large and well marked) almost half a kilometre away. It was a hot afternoon but when the walkers arrived back on top of the flight of steps they decided to walk further and loop around Shaw Bay, following in the footsteps of the altitude-avoiding hash walkers.

Back On Home, on the terrace of the closed down Tony's Cafe, Hares Dame Edna and Out Of Africa welcomed the returning runners and walkers.

Impulse said he enjoyed the run and was able to confirm there were lots of hills. Certainly seven.

Draggin' The Chain spoke about the low altitude alternative walk and Hootu commented, as always, that it was an excellent walk.

Downs Downs were given to:

Dame Edna  - Hare for a well marked (and hilly!) trail
Out Of Africa - Co-Hare and grub organiser
Miss Took - 100 Runs! Congratulations - and celebrated with a shandy shower


Hares Dame Edna and Out Of Africa served served up Malaysian inspired food as the hash sat around and relaxed in the cool shade of the afternoon. Many thanks to the Hares for a great hash trail and On Home on such a glorious afternoon and a great location. 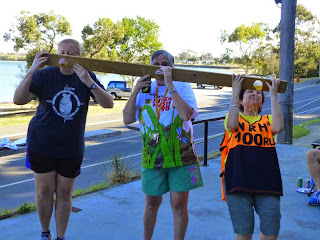 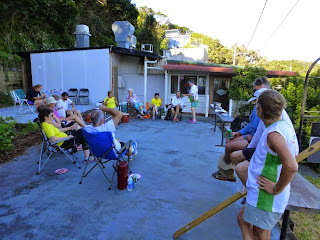