A beautiful Spring evening after a miserably wet weekend. Hash Brown trotted off into the dark with a reasonably large group of runners, closely followed by Retread, leading the walkers. A snappy pace was soon established as the walkers wound around the eerily quiet streets of Alstonville. At one point on the trail, the walkers paused to take the opportunity to view Miss Took's famous trimmed hedge. It was OK as hedges go, with leaves and that sort of stuff, but not the excitement some were expecting. Perhaps their understanding of a trimmed hedge was not one usually found behind a white picket fence. Striding onward, the walkers reached Alstonville CBD (Ha Ha!) where Retread offered a shortcut Home. Enjoying the night, no one took the option and the hash strode on.

Behind the pub, Feel Free and Hug Me spotted a female standing in the deep dark shadows of some trees. They raced off and, with the smoothest of patter, were soon escorting her around the corner - under the watchful eye of the rest of the pack. After this novel episode and delay, the walkers then shortcut Home, with some shortcutting even more down 'lovers lane'.

Back On Home, everyone spread themselves comfortably around the Hares patio, only to be called to order by Religious Advisor Upcycler. In the Circle, Alternative Root was asked to talk about the walk. She gave a surprisingly detailed analysis of the walk, complete with dramatic gestures (most of the time) that held everyone rapt with attention. Referring to the fast pace, she noted that many were 'puffing and panting' and she watched nervously as Feel Free and Hug Me delivered the woman to her car. A fast getaway, with the hash milling in front of the car, could have caused a certain degree of mayhem. Craig then spoke about the run and delivered a somewhat more modest and dramatically un-dramatic appraisal. Despite taking a shortcut (as noted by Hash Brown), Craig had enjoyed the hash and rated it 'good'.

Hash Brown - Hare for another enjoyable hash around quiet Alstonville
Retread - Co-hare who led the walkers on an appreciated brisk pace
Feel Free and Hug Me - For exceptional gallantry in helping an 'old dear' to her car (when she probably wanted to cross the road in the opposite direction and go to the pub)
Slurrrrr - Birthday Girl - Congratulations
Upcycler - 100 Runs - Well Done!
Spin Cycle - for winning the 10kms run in the Lismore Masters Games

Excellent hash grub followed, which involved many refills of plates. Many Thanks to Retread and Hash Brown for hosting the hash and a great night of Hashing!


Alternative Root at a less-dramatic moment 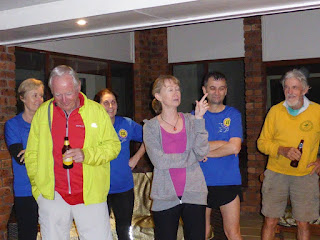 Spin Cycle appears rather unsure about her Down Down nomination 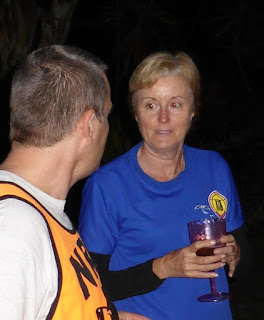 Down Downs (Retread lost in the dark!) 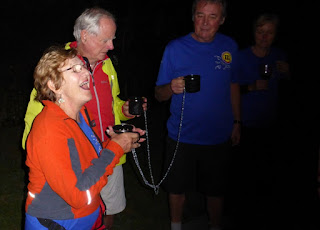 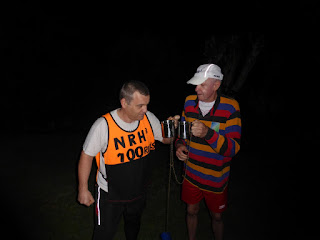