A precocious possum lives on the roof of Hare Scrambled Eggs house. The last time we hashed from here, the possum did a spectacular high wire wobble over the heads of the assembled hash. Not to be outdone, it repeated this feat again. Fortunately, for those gathered beneath, it was a poo-less possum. Entertainment over, Hare Scrambled Eggs sent off the runners before leading off a large group of walkers into the night. After crossing the main road and passing through a reserve, the hash walked the gamut of, fortunately fenced-in, dogs in back yards. They were quite excited at our passing . We were quite relieved to pass by unscathed.

The trail continued to wind around the quiet streets of Alstonville. Hare Scrambled Eggs sometimes gives a local history lesson on trail, but perhaps it was too dark this night. Still, the sight of a tawny frogmouth, balancing on overhead wires, generated keen interest - unlike the passing of the runners from another direction. After passing the back of the pub, the trail made a few more wiggles then headed for Home. Miss Took and Headlamps paused in the deep dark  to admire Miss Took's recently trimmed hedge. Feel Free, who has never previously displayed interest in anything arboreal or horticultural, declared he was devastated to have missed this wonderful sight.

Home, and settled on the Hare's deck, a Circle was held to review the night's Hash.

Happy Feet said that she had her head down for most of the time, so she did not know much about the run. She recalled there were only a couple of hills, which were a bit high. Her most memorable recollection was a toilet stop at the Showground. Perhaps she needs to get out more. Other than that, she had no idea where she was and 'trusted the boys to get her home'. Hmmm.

Headlamps spoke about the walk which she thought was good, passing through different streets than previous hashes. Like Happy Feet, she too had no idea where she was.

Down Downs were handed to:

Circle closed, the Hare provided nutritional advice on the food, advising that vegetarians should avoid the meat and gluten-intolerant avoid the bread. He did not say who should avoid the lettuce, but everyone did. By the end of the evening there was a huge bowl of the stuff left.

Many Thanks to Scrambled Eggs for a great night of hashing in the wild and unknown areas of Alstonville; hosting the Hash and serving up solid hash nosh. 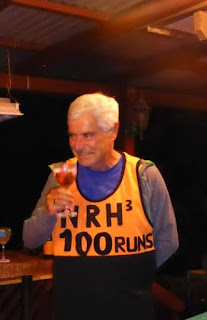