Next Run - (no. 1570)
When - Monday 24th August 2015 6 p.m.
Where - Goonellabah Tavern, Bruxner Hwy Goonellabah
Live Hare
Last Run - (No. 1569)
When - Monday 17th August 2015
Where - Pioneer Tavern, Wollongbar
Hares - Lost With Space and Space Cowboy
It was a relatively small group which gathered at the Pioneer Tavern Wollongbar.  It seems we are all taking turns in battling the lurgy this winter.  Some might be greedily having more turns than others though. Even so, the usual fun was had out on the streets of Wollongbar on a mild night barely lit by a crescent moon.
Hare, List With Space, lead the walkers off, map held tightly and referred to often.  A few pauses were necessary for orientation on such a dark night.  Wollongbar, having less hills than Alstonville, Goonellabah and even some parts of Lismore, tends to be easier on the legs.  Conversation was robust.
There once were hashers out for a walk
Their task was to follow the chalk
Wearing lights on their feet
They got lost in the street
It seems they did nothing but talk
Hare, Space Cowboy, had gone out earlier to set the course.  He didn't turn up to see the result of his efforts.  Possibly he was scared off by the hashers' poor habit of dissing hares.  Since he missed it, we will do it now - There was a looong way between some of those arrows!  This had the runners unusually dazed and confused and doing a lot of backtracking.
The three runners were greatly outnumbered by walkers.  Polarised, experiencing one of her runner's highs, visualised us as three little pigs huffing and puffing all the way to hash home.  All was going welll until a park had the runners scurrying in three directions looking for toilet paper, only to converge on the other side directionless (because the next arrow wasn't anywhere to be seen).  I think at this stage we were more like three blind mice.  You've never seen such a thing in your life.  It is times like these that Procol and Hash Brown are missed with their extra sensory direction perception.
Runners have stumbled upon a secret.  When not sure which way to turn - Stop. Listen. Be very quiet.  The distant cackle of the walkers can be heard!  On on we go towards that familiar and reassuring sound.
Back at the tavern, we became a small, yet well-fed group with large meals enjoyed by all. 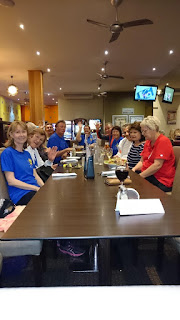 Thankyou to hares, Lost With Space and Space Cowboy for a well thought out trail with clear arrows (when we could find them - but there'll be no more dissing).