The first hash run in the dark was almost a wet run in the dark, as a rain shower swept past Hare Scrambled Eggs abode, shortly before ON ON. After basic instructions from a barefoot Hare Scrambled Eggs (he obviously was not intending to venture out on such a dark and rain-threatened night), it was time to start hashing. Fortunately the rain had cleared through and a good turn out witnessed a hash run of old (i.e. Polarised running off alone in the wrong direction at the start). Hot on the heels of the already disappeared runners and almost disappearing Polarised, the walkers were promptly led off by Slurrr. A winding trail through the reserve was followed by more winding - this time through the streets of a darkened Alstonville.

In front of the pub, and almost near On HOME, it was decided to extend the planned walk, so Slurrrrr and Retread set off to continue winding around in the dark, happily followed by most of the walkers. The runners were glimpsed a couple of times and finally caught up with as they stopped for a chat at Sally and Huw's residence. There appeared to be much discussion as the quality of the grass in the front of the house and an offer of re-turfing. It was then once more out into the dark and along winding footpaths to Teven Road, then a turn for ON HOME.

The runners and walkers all reached HOME close together, which is always the sign of a good Hash. The walkers were certainly appreciative of the added walk.

Plugger spoke about the walk. His description was inspirational and proved to be one of the most uplifting commentaries ever provided on a hash. Regrettably, from the initial word of 'Stunning', no one could quite understand what he was actually saying. In summary, he was saying it was a great walk as it didn't rain and, as it was dark, you could not really see anything.

Kizzme said it was a good run and was her first run since returning from her semester break (something to do with education apparently - lost in the mists of time for most hashers). She said it was a solid run until they stopped for a chat, then a slow plod ON HOME.

Down Downs were given to:
Scrambled Eggs - barefooted Hare for a good hash and - also - Birthday Boy! Congratulations!
Miss Took - for helping the Hare with his catering (her non-hash outrageous footwear will go without mention) and also her late arrival. She was also awarded 'Dummy of the Week' for having a dummy spit at having to do a Down Down.
Hash Brown and Retread - Congratulations on their 41st Wedding Anniversary!
Polarised - Another Wedding Anniversary Congratulations!


Following a great wedding anniversary joke from Hash Jokemaster Bituman, the hash happily stuffed themselves on the Hares hash grub. Many thanks to Hare and Birthday Boy Scrambled Eggs for hosting the hash and also to his assistant Miss Took, who "helped the barefoot chook to cook". 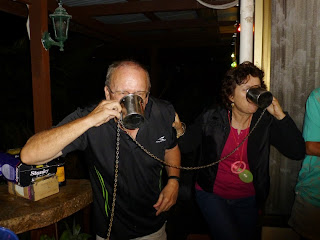 These feet were hashing nowhere 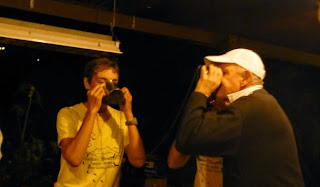 Congratulations (and to you too Retread!)