A great roll up on a glorious Easter Monday, the wild weather of Easter having gracefully cleared, just in time for NRHHH. The weather was so glorious, quite a number of hashers decided to take a scenic drive towards Nashua, prior to returning to Booyung. With the call of ON ON! the runners ran up towards Booyung junction, hopefully taking the opportunity to admire the abandoned station and sad curve of the deteriorating bridge, before heading back down to the Oval. Hare Goanna directed the already puffing runners, in the opposite direction  towards the bridge over the river. After rather wicked on back,  they realised that it was all something of a wild goose chase and returned to the Booyong Big Scrub reserve, to finally follow the walkers into the tiny remnant of rainforest.

Meanwhile, the walkers were having a delightful amble through the reserve, weaving amidst the tall trees and marveling at the trailing vines and clusters of fungi. As instructed by Hare Goanna, there was lots of looking up at the wonders of the rainforest. Slurrrr and Tea Bag seemed to believe they were in paradise. Lost With Space resisted the urge (only just) to swing on the dangling vines like Jungle Jane (a comic hero, not a hasher). At a brief pause close to the river, Retread and Feel Free displayed their local knowledge of this fascinating piece of rainforest and its historical importance, by pointing out that the famous 'Scrub to Pub' race used to start nearby.

Close to the end of the circuit, the slightly faster ambling runners caught up with the tail of the walkers. Ian (soon to be called something else) and Hash Brown complained about the slow pace. With all the potential trip hazards of vines, roots and twigs, they should have been grateful of the slow pace.

Back at the Oval, Goanna handed out Easter Eggs (of a modest size) and organised (if that is the correct term) the hash into four teams, for a number of Easter Egg games. The first game, an egg and spoon race, passed off quite well, although two hashers seemed to think that the purpose of the game was to actually lay eggs, not carry them on a spoon. 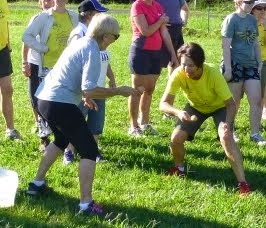 Spoon handovers were carried out with the precision of an Olympic relay race (sort of). 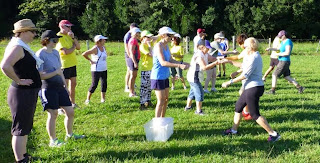 Goanna's attempt to organise an egg throwing game proved rather difficult. Eggs were thrown with a joyous and wild abandon, as if training for the next anti-CSG mine demonstration. Miss Took, resplendent in her beautiful hash necklace that was brought all the way from Belgium; home of the world's best diamonds (not that her necklace has any diamonds), displayed a catching ability that even the England cricket team would have been embarrassed with. Well, possibly not. Strangely, everyone seemed to be executing a form of Scottish dancing, rather than competing in a serious game.

It was time to stop all this frivolity and get back to the formal nature of hash, by forming a Circle.

Hash Brown spoke about the run. He said that he felt like mother hen, always having to keep a look out for the 'young guns'. Apparently, following Hare Goanna's suggestion to "look up" had not been a good idea, as he kept tripping up. He was also quite confused at the little scrub (the 'wicked' on back).

Feel Free spoke about the walk and said he felt like it was being led by David Attenborough or Harry Butler, as he made his way trough the rainforest. He thought it was very interesting. Miss Took, still dribbling egg stuff from her mis-catch, said she found the walk fascinating and loved the fun guy. After wondering who the 'fun guy' was, it was eventually realised that she meant fungi.

Down Downs were given to:
Goanna and Plugger - Hares for a spectacularly fantabulous run ( I think that is what someone said)
Hash Brown and Lost With Space - for over-zealous and over-achieving egg throwing that had every car owner in deep concern over egg being splattered across their windscreen
Miss Took - for her imaginative, and ultimately unsuccessful, method of egg catching
Ian - bestowed the honourable hash name of Twiggy, due to his propensity to trip over any twig that manifested in his path (and also his glaringly white 'twiggy' legs)


Down Downs sunk, quiches and salad were served up to an appreciative hash. A great way to spend Easter Monday! 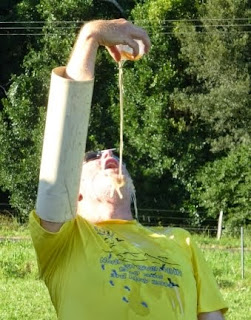