After a day of miserable wet and cold weather, the skies cleared to a beautiful autumn evening. Well, not quite, but the rain did ease off to just a drizzle. Undeterred, a hardy group of hashers gathered at Hare Bituman's abode. After a few preliminary instructions, that no one really listened to, Bituman led off the runners and, armed with a map, Slurrrr led off the walkers. Much consideration had been given to the appropriate attire for such a drizzly night. Most of the runners all loped off wearing singlets whilst, for the walkers, flouro rain jackets or umbrellas seemed the attire of choice.

It was very atmospheric wandering the mist shrouded slopes of Goonellabah in drizzling rain. Walking at a brisk pace, it was not too cold. Goanna soon followed by Tea Bag, who was wearing the 250th Run jacket, turned for Home after a couple of hills. Hash Brown, who recently celebrated his 41st Wedding anniversary, nearly did not make his 42nd as, at one point, he paused on a busy road to expand upon an item of topical news that he felt passionate about. Retread, who felt passionate about making sure he was around for their 42nd anniversary, quickly moved him onto the safety of the pavement.

Marching along the main Ballina road, the walkers were overtaken by the runners. Upcycler 'tagged' Hash Brown, who then ran off. Apparently they were on a 'tag' run. Polarised seemed to be on a run of her own, as she ran off in a totally different direction to everyone else. Losing the runners, the walkers found themselves wandering around Goonellabah Oval, before they gave up and headed On Home. Helen became really excited about walking down a street she had not walked down before. As the hash often goes down streets rarely travelled, we can only hope she does not become overcome with excitement every time she walks down yet another mediocre suburban street.

Back at Bituman's a convivial circle was formed around a table groaning with excellent grub. As even more grub was being brought out, Upcycler called a Circle and asked for comments on the hash.

Procol spoke about the run. He said there were not enough hills (possibly a joke) and that the weather was shocking. Still, it was a well thought out run that had caused Polarised to get lost, fortunately to be rescued by Procol.

Lost With Space spoke about the walk and said she loved the flat walk (possibly another joke) and thought the weather brilliant (definitely a joke). Walking through the drizzle she was only nearly run over a couple of times. A highlight was a tawny frogmouth, perched on a fence at the Goonellabah Oval. The Oval sounded not to have been a highlight, as trail was lost. After wandering around shining torches into the backs of houses, with a pause to look at lots of rabbits, it was On Home.

Down Downs were given to:
Bituman - Hare for a great hash on a weather-challenged night
Tea Bag - for achieving a celebratory 250 Runs. Well Done!
Lost With Space - for finally getting a new car to replace the previously rather mangled one

Mrs Bituman and Bituman then proceeded to serve a sumptuous hash dinner that brought a quiet to the evening as everyone munched away. Although not everyone was quiet, as Upcycler was awarded 'Dummy of the Week' for excessive moaning. The food was really excellent and even Tea Bag's dog had a bowlful to help him celebrate Tea Bag's 250th run.

An excellent night and Many Thanks to Hare Bituman and Mrs Bituman for being such wonderful hosts and serving up a glorious meal. 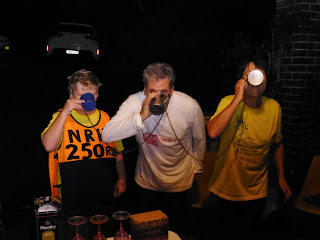 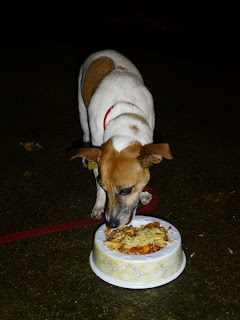