Thunder rumbled and the skies blackened as a small group of hardly hashers gathered in Hare Tea Bag's garden for her seemingly traditional wet run. And wet it was. The heavens opened as ON ON! was called and a surprisingly merry gaggle of umbrella-ed hashers wound their way down the road. An even smaller group of runners had already streaked off through the rain. Whether you were travelling at the speed of sound or ambling at the pace of an injured snail, you were destined to get wet on this run.

Slurrr and Space Cowboy led the walkers on a weaving trail through the streets around the University. The runners, who were following the marked trail, soon raced past, with Spin Cycle pounding along in a very competitive second position. Draggin' The Chain strode resolutely on, but her resolution dissolved at the first hill. Realising she could not make an early exit without everyone noticing, she strode on and up. New(ish) hashers Helen and Jane appeared blissfully unaware of the rain (and hill) as they walked along, deep in gossip/discussion. Alternative Root chose an alternative method of ascending the hill - walking up backwards.

Atop the hill, which really was quite a modest hill, the rain stopped and, after a Hash Halt, the walkers continued their weaving trail, passing St Vincents Hospital before heading On Home.

Religious Advisor, Upcycler called a Circle, which, quite fortuitously, had already formed, and asked for comments on the hash.

Turning to the walkers, Runnymead said she had been too busy talking to notice the walk (how unusual). Miss Took however demonstrated that she had been keenly attentive throughout the walk. She commented that she got very wet. Lost With Space expressed her terror at being out amidst thunder and lightning, especially when walking beside 'Lightning Rod' (Saddle Sore). Still, for those who noticed, everyone agreed it had been a great hash walk.

Tea Bag - Hare for her traditional wet run
Plugger - A spectacular 250 Runs (Goanna complained that he kept getting his nipple played with by Harriettes, adjusting the '2' on his top. Plugger did not complain at all)
Bituman - for arriving late - and not wearing any hash gear!

Great hash grub of bubble and squeak patties followed. Many thanks to Tea Bag for a memorable hash run and hosting the hash on yet another wet night in Martin Drive. 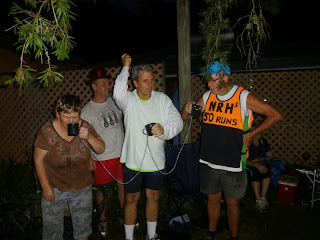