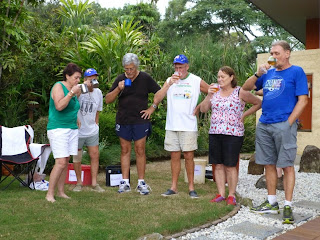 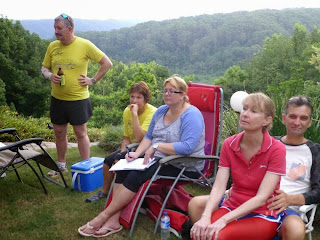 Plugger
Posted by Gary Manning at 1:59 pm No comments:

The forecast wild weather failed to arrive so, much to everyone's surprise, including Hare Impulse who had expected his trail to be washed out, the hash set off on a warm and sunny evening. The runners quickly raced off, followed at a decidedly more leisurely pace by the walkers, led by Co-Hare Auntie Lush. After twisting around a few streets, the hash were soon embroiled in controversy. Nothing to do with CSG or uranium mining, just a belligerent householder who claimed the hash were wandering through their back yard. Just before the walkers disappeared behind a fence, Hug Me heroically gave 'the finger' to the belligerent household. Ambling on, the trail wound through Invercauld Estate, which is now being sub-divided to raise some cash, then back along the ridge line of Invercauld Road, passing some interesting gardens along the way. One garden was so beautifully laid out with different species of cactus, the proud owner must be on his knees every night praying for Global Warming to manifest within the next fortnight.

As the evening grew warmer, Hug Me took off his flouro NRHHH 50 Runs top, to then be almost mown down by a passing car. Also feeling the heat, and nothing to do with the possibility of encountering a few hills, Alternative Root and  No More Gaps decided to take an alternative route of their own and headed directly On Home. After a few more wiggles around streets, which were not too hilly, the rest of the walkers were soon following them Home.

Around the Circle, Spin Cycle spoke of the run, which did sound to have been quite energetic. She said that she thought that Goonellabah was probably Aboriginal for 'Land of Hills' as that was how it felt on the run. There was lots of long grass, where she got left behind. However, in true Hash tradition, the runners waited until she struggled through, then raced off.

Hug Me said he had found his 50th walk very hard whilst wearing two layers on a hot evening. He had also found it quite exciting; giving 'the finger' to someone who claimed we had trespassed on their private property, only to scramble around a fence onto someone else's private property. He enjoyed the walk along Invercauld Road to Clifford Park where, after cogitating on the new turf (it is to be hoped no one was watching) the walkers returned home. Retread pointed out that by walking in the middle of the road, as a car raced along, he would be lucky to complete his 51st run.

Impulse - Hare for an energetic hash of hills and long grass
Auntie Lush - Co-Hare for the walkers on their drama filled walk
Hug Me - For a spectacular 50 Runs - Congratulations!
Goanna - For a very 'spotacular' 250 Runs - Well Done!

A further sparkling Down Down was given to Religious Adviser Upcycler for his birthday. Happy Birthday!

Excellent hash grub was served up by Auntie Lush that was appreciated by all. Many thanks to the Hares for a great hash run and grub!

Plugger
Posted by Gary Manning at 2:02 pm No comments: 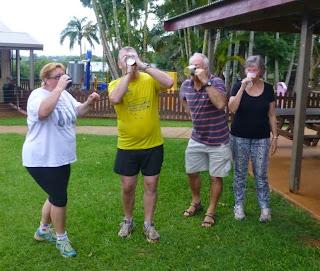 Plugger
Posted by Gary Manning at 4:29 pm No comments: