Where - To be advised

A wild and wind-blasted evening at Skennars Head. So wild in fact that, according to Hare Draggin' The Chain, the trail arrows had all been blown away; or washed away by the rain (that still had not arrived yet). So, armed with photocopies of the weather-challenged trail, the hash set off into the teeth of the wind. Procol led off a trio of runners (he is no longer the harem of old) whilst Saddle Sore, brandishing copies of the trail aloft, led off the walkers.

Passing under the road, the hash arrived at the beach together, the walkers turned south, keeping the wind and wind-blown stinging sand behind them whilst the runners turned north. it was quite a strange sensation to be blown along the beach whilst sandblasted from behind. Miss Pushy, keen to really get some exercise, powered away down the flat beach, fortunately managing to stop before she dashed herself on the rock outcrop that lay ahead. Energy spent, she puffed all the way home. At Flat Rock, as the skies darkened and grew more ominous, the walkers turned for Home, returning along the newly constructed footpath that, as yet, does not quite get to Skennars Head. A spectacular sunset filled the skies with every colour imaginable. However, heavy plops of rain broke any romantic reveries and everyone made a rapid race for On Home, arriving just before any serious rains fell.

Back in Draggin' The Chain's cosy garage, the circle discussed the hash trail. As Runnymead had not ventured further that the end of the driveway, her ruminations on the trail were not sought.

No More Gaps said she enjoyed the walk along the beach to Flat Rock camp site and had a good chat along the way. Her fellow chatterer, Dung Beetle, said they were speculating as to whether Draggin' The Chain would be 'pickled' by the time the hash returned. Apparently/allegedly (choose your own word) this was the Hare's condition on a previous occasion.

Kizzme came in as the last runner and remarked upon the lovely view she had, from behind, of the other runners throughout the trail. She was amazed at the shocking wind, which brought on a 'Titanic moment'. The trail end was certainly momentous, with a great sunset.

Bituman noted that it was something of a commemorative run, in commemoration of a hasher throwing caution to the wind (something he would not have attempted on this wind-blown evening) by asking a fellow hasher to consider thoughts of betrothal. Bituman presented Hootu with a carefully selected flat rock (actually a pebble). Polarised remained demurely quiet.


Downs Downs were given to:

Draggin' The Chain - Hare on such a wind-blown evening (who used a plate to save any grog spillage, either to protect her hash tee shirt or not waste any valuable grog)
Giuseppe - Hash visitor from Italia (Miss Took's cousin) who said he would remember this hash night always.
Miss Pushy - Welcome return to a hasher, missing for many a hash run 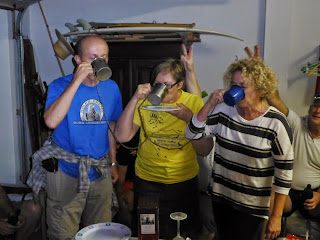 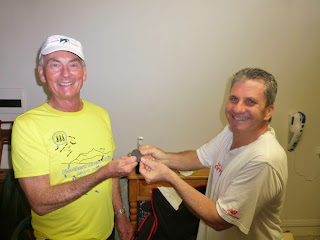 Hare Draggin' The Chain, putting her Italian to the test, served an excellent meal of lasagne (pronounced laasaaaagneeye apparently) with salad. Many thanks to Draggin' The Chain for hosting the hash and a great hash night at Skennars Head.

Plugger
Posted by Gary Manning at 9:15 am