A large turnout on a night when the rains miraculously eased and stars, unseen for countless nights. actually twinkled overhead. After a pause to let the runners run up and down the street a few times, Hare Feelfree, guided by Barney, led off the walkers. The streets of Alstonville were criss-crossed and the walkers kept close together with many Hash Halts along the trail. In the deep dark of the night, the hashers could not help but notice that the Federal Government's Budget problems seemed to have extended to NRHHH, as the trail arrows were few, tiny and barely visible. "I only had a tiny piece of gyprock" explained Hare Feel Free. Throughout the first part of the trail, the runners kept crossing with the walkers, always the sign of a well set run. Hash Brown, who was apparently not running, ran past a couple of times. Retread finally disappeared off into the night, to catch up with her non-running running partner. Halfway round, Saddle Sore strode ahead, leading the hash Home, closely followed by the walkers, who ensured that they did not lose sight of Barney, just in case there were any late surprises in the trail.

Back in the warmth of Hash Host Miss Took's garage, the Circle was enlightened on the hash, with Runnymead talking about the walk, with lots of interjections from others. Apparently, Runnymead had talked most of the way (how strange), so she really had no idea where she was or where she had been. She did remember it was flat. Reflecting upon the environment, she remarked that she thought she had seen a platypus, but it was only frogs - and that there were lots of stars.

Speaking for the runners, Impulse said that according to his new watch, which evidently does more than just tell the time, he had used used up 620 calories and run 6km. He declared it to be a 'Bonzer' run, thereby betraying a knowledge of the dreadful TV series "Anzac Girls'.


Guest Joke-Master (Miss Took's mother) told a hilarious joke that had Headlamps and the Hash reeling with laughter. Following the presentation to Miss Took of a hash necklace, an item of jewelry she has always dreamed about, dinner was served, with lotsa soup and bread and home-baked cake.

Many thanks to Miss Took for hosting the hash and a great night, and also to Hare Feel Free for his great hash trail. 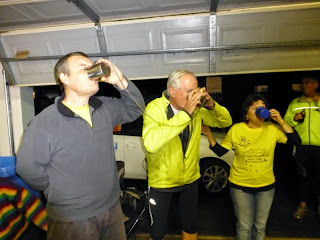 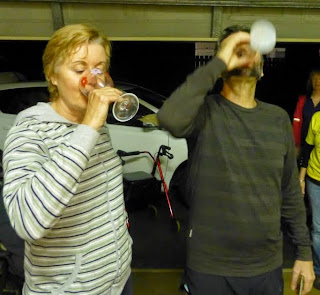 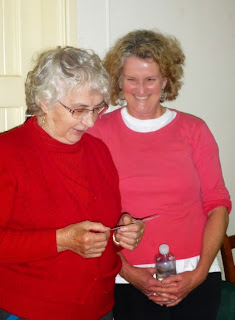