Hi Hashers,Next Run (no. 1508)When:   16th June 2014 at 6pmWhere: 157 Invercauld Rd, GoonellabahHares : IMPULSE (Garry) and AUNTY LUSH (Alison)NOTE:  Please bring a chair.Last Run (no. 1507)When:   9th June 2014 at 3pmWhere: 93 Rouse Mill Rd, Rouse MillHares : Lost with space (Sue) and Space Cowboy (Steve)Queen's Birthday runRoyalists and republicans alike gathered at Rouse Mill to help celebrate the birthday of the queen.  To get into the spirit of the day, hashers were asked to come dressed up to help celebrate the special occasion.  It was wonderful to see crowns, tiaras and other "queen-like" items of clothing being worn by various members.  We even had a corgy making an appearance.The runners were led by Space Cowboy (Steve) and headed off into the macadamia trees while Lost with space (Sue) led the walkers off on a more respectable walk down the road.  The walkers and runners must have looked a site to passers-by, a rabble equipped in formal attire and crowns.It didn't take long for the walkers to veer off the bitumen and head off cross country through another macas plantation.  Some of the steep inclines proved to be a challenge for the walking wounded amongst the group (I am looking at you Hash Brown (Peter)).  It wasn't long before the walkers reached a barb-wire fence, with the runners catching up with the walkers at about that point.Procol (Gary) at this stage announced that he had given Yarnbomber (Dayle) a bit of a bum-steer. She had dropped off the end of the running group and Procol pointed her in the direction of where he (incorrectly) thought the walkers were going.  It was agreed that the walkers would eventually get to the point where Yarnbomber was heading and that we would meet up with her then.  Fortunately this proved correct, and a slightly miffed Yarnbomber was able to join the walkers for the remainder of the walk.The trail took everyone across a few more properties before ending at a beautiful waterfall and large rock overhang/cave.  Some of the braver souls even crossed over the slippery rocks to get down close to the waterfall.  After that is was a simple meander back to base for the rest of the celebrations.At the Circle, we were all blessed with a surprise appearance from her majesty herself (in the form of Aunty Lush (Alison)) who gave a wonderful speech about how impressed 'one' was wandering amongst all of the local nuts, and how much 'one' enjoyed viewing afore-mentioned nuts.  Munto (Paul) spoke about the run and gave the run a score of 7 out of 10.Down Downs were given to:Lost with Space - Hare and host/cookSpace Cowboy - Hare and hostKizzme - New member Kate was given her hash name of Kizzme.  This name was a narrow winner over other suggested names "On-thingo" and "Deffa"Lost with space kept with the theme of the day, serving bangers and mash with mushy peas and onion gravy, followed by Lemon Meringue Pie, all of which went down a treat. All in all, a great hash and a wonderful way to celebrate the long weekend.NOTE: Bali Interhash  20-22 May 2016 - start saving now....16/06/2014    Garry Euston and Alison Cleaver23/06/2014    Gary - pub run, Mary G's30/06/2014    Faye Benge and Rod Bailey07/07/2014    Patrick Fitz-BugdenOn On!Upcycler
Posted by Gary Manning at 1:27 pm No comments:

For everyone's information (including the Hare's!) - below is the Hare
list for the next couple of months. Hopefully it suits all.

Plugger and I are off overseas until mid-August - and so if there are
any problems, can you contact Upcycler at Hash on Monday night or email
(simon_perm@yahoo.com.au)

Many thanks to Upcycler for offering to do the Hash Trash in our absence
and looking after the Hares,

Hi Hashers,Next Run (no. 1507)When:   9th June 2014 at 3pmWhere: 93 Rouse Mill Rd, Rouse MillPh: 6629 5408 (if you need directions)Hares : Lost with space (Sue) and Space Cowboy (Steve)Queen's Birthday run - Wear your regalia!It doesn't matter whether you're a republican or a monarchist - it's a HOLIDAY!  Come dressed up to help celebrate this special occasion!  Make sure you bring along your songbooks (handed out at our 1500th run) and your singing voice to go along with it.NOTE:  NO DOGS PLEASE.Last Run (no. 1506)When:   2nd June 2014 at 6pmWhere: 23 Hurley Street, LismoreHares : Upcycler (Simon) and Yarnbomber (Dayle) It wasn't the strongest turnout for a hash run, with only a dozen or so dragging themselves from the warmth of their homes to amble and stumble their way around Lismore and East Lismore.  The night was cloudless and a bit breezy when we all gathered out the front to start our walks/runs.  The running group was again struggling for numbers, with Procol, Bituman and Kate making up the numbers.  Upcycler handed them the map, pointed them in the right direction and left them to their devices.  Hare Yarnbomber verbally took the walkers in hand and they all disappeared off down the hill.The trail took everyone across into East Lismore, and managed to take on a few short but noticeable hills to help get everyone's hearts pumping.  The runners found some interesting challenges along the course, including some unexpected speed humps almost bringing them undone.  The walkers also had some confusion around course markers, or to be more specific, Miss Took held true to her name sake, mistakenly identifying a sewer grate as a Hash Hold.Close to the end of the trail, some of the walkers were distracted by the smell of cooked sausages on the Barbecue at the netball courts, and were considering offering a couple of dollars for one with onion and sauce.  Of course, this would have required actually having money, something which was in short supply at the time.At the Circle, which was formed around a persistently annoying smoking fire, Slur volunteered to speak about the walk.  She reported that it was an enjoyable walk on a beautiful night.  The walk was a good distance with enough hills to make it interesting.Procol spoke about the run, and commented on Whites Lane, and how he did not recall it ever being run down before.  The course was well marked with the map only needing to be referred to once at the traffic lights.Down Downs were given to:Upcycler -Setting the hash trail and host/cookYarnbomber - Hare for the walkers and hostSlur - for offering to give lap dances, and for giving Saddle Sore "a little woody" (which sounds like a good hash name to me)Upcycler served up slightly burned Dahl with Papadams and home made mango chutney, nice and warming on a cool night. Many thanks to Upcycler and Yarnbomber for hosting the hash and a great nightNOTE: Bali Interhash  20-22 May 2016 - start saving now....9/06/2014     Sue and Steve Miller - Queens Birthday16/06/2014    Garry Euston and Alison Cleaver23/06/2014    Gary - pub run, Lismore30/06/2014    Peter and Alison BrownOn On!

Upcycler
Posted by Gary Manning at 11:49 am No comments:

A great turnout on yet another mild, star-filled night. There may have been billions of stars overhead, but there were only three runners, as Polarised and Procol ran off into the night, closely followed by Dame Edna, who had dedicated the run in honour of her good friend and Australian athlete, Penny Gray, who had recently died (more below). Hare Feel Free led off the large pack of walkers. As Barney was actually leading the walkers, it was destined to be a slow pace. Thankfully, whilst the walkers had to comply with the pace set by Barney, they did not have to equally comply with his many toilet stops.  The slowish pace proved to be ideal for Toecutter as, from the commencement of the trail until about the halfway point, she was deep in discussion on her mobile - a hash cardinal sin!

The trail wound the streets of Alstonville and, with a series of fiendishly clever on-backs, the Hare kept the runners and walkers close together. The on-backs were so devious, they even caught quite a few walkers. Shortly after the runners descended a steep hill, Dame Edna joined the walkers, leaving just two runners to blaze the trail. Hare Feel Free had laid many checks along the trail which, as Goanna noted, were all curiously egg-shaped and from  experience, were the result of setting trail on a bike.

Close to the end of the trail, some of the walkers were scared out of their deep discussions by Saddle Sore, when he leaped from behind a bush, yelling like some wild banshee. He was surprisingly realistic. Space Cowboy and Lost With Space cruised past the hash on the Home straight. According to Lost With Space, they would see us later as "they had been invited around for dinner at Rosi's". It seemed rather an elegant way of saying they were dropping round for hash nosh at the Hare's.

At the Circle, which really was an elongated slender rectangle, but we will not let geometry impinge upon the hash, Toecutter was called upon to speak about the first section of the walk. Unsurprisingly, she had not noticed much, but she did rather excitedly tell the hash about her new job offer whilst, already in job mode, promoting various organic ginger beer products. No More Gaps said it was a good walk with a good pace (Hmmmm). Feel Free was happy to note that he heard a lot of recipe swapping and crochet talk during the walk, as he always wanted to become a member of the Woman's Auxiliary.

Polarised spoke of the run, on behalf of the only two runners.  She wanted to give Down Downs to all the runners who didn't run, as it left only herself and Procol to do the running. However, she felt that would encourage all the runners to walk in future, so as to get a free beer. It had definitely been a struggle to run a hash, with only two runners!!


Dame Edna offered a toast to her late friend, Penny Dunbabin (nee Gray) who was one of Tasmania's finest female athletes; being both a middle-distance champion and hockey Olympian. A dual international, Penny had represented Australia at both athletics and hockey. Penny had exploded onto the national athletics scene as a record-breaking junior in 800m and 1500m events, and in 1979 became Australia's No.1-ranked woman in the 1500m and was selected to represent Australia at the 1980 World Cup in Germany. In hockey, Penny represented Tasmania from 1976 to 1986, and was state captain in 1981 and 1986.

Feel Free -Hare and for setting an interesting hash trail, with devious on-backs
Miss Took - Co Hare and wonderful host
Toecutter - for walking and mobile-talking for most of the trail
Geoff - new Hash Name 'Hugme', after hugging a complete stranger in a darkened pub car park - in front of her husband!
Hash Brown - for finding the only rock in Ballina to cut his knee open on

Miss Took served up glorious 'Italian' grub of tacos and burritos, followed by a scrumptious homebaked orange cake. Many thanks to Miss Took for hosting the hash and a great night, and also to Hare Feel Free for his great hash trail. 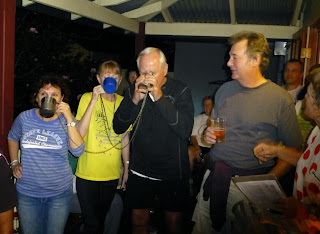 Plugger
Posted by Gary Manning at 9:02 am No comments:

Hi all,  not sure if something went worng or not but it seems that no email has gone out this week.
we are running (afaik) from 23 Hurley Street, LismoreHares :  Upcycler (Simon) and Yarnbomber (Dayle)
ProCol.
on on
Posted by Gary Manning at 12:33 pm No comments: